Submitted by the Executive Secretary August 18th, 2016 for posting to the web site. 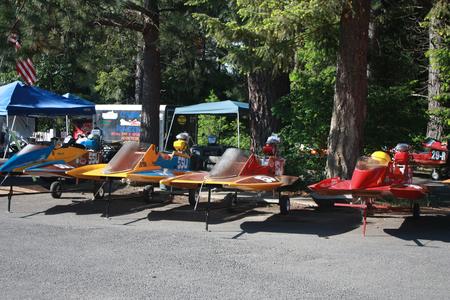 2.      OFFICERS: The officers of the association shall be the President, Vice President, Safety Director, and Secretary/Treasurer, and to be elected by majority vote cast by all members.

A: All Officers, Directors, and appointed committee members, Referees, Starters, and Inspectors must be members in good standing of this association.

4.      DUTIES OF THE OFFICERS: The duties of the officers of the Association shall be those usually pertaining to the respective offices.

PRESIDENT-Will serve as Chairman of the Racing Commission ad conduct all meetings of that body. The President has the authority to appoint special committees to carry out the affairs of the Association and may call for a financial audit at any time.

VICE PRESIDENT-Will serve as President in the absence of the President. Will appoint Technical Committees. There will be a Chairman for each division and each committee will consist of no less than 3 members each.

SECRETARY/TREASURER-Will be responsible for the annual publication of a comprehensive financial report of the Association to the Membership. Recording the minutes of all meetings, and receiving and dispersing all funds for the Association. The Secretary/Treasurer is bonded for an amount of funds the Association may accumulate as agreed upon by the Racing Commission. He/She will also assist the Executive Secretary.

SAFETY DIRECTOR- Will be the Director of all safety matters concerning the National Boat Racing Association. The Safety Director will manage the Lifeline Novice Lifejacket Program.

A:        Coordinate with local clubs Safety Inspectors to insure that Novice Drivers have properly fitting lifejackets.

B: The Safety Director has the authority to sign out a National Boat Racing Association lifejacket to the parents of the driver that requires a good lifejacket, insuring it is returned at the end of the race season.

C: When a lifejacket is returned, the Safety Director will inspect the lifejacket and send any lifejacket that needs repair to the Lifeline Company.

6. TECHNICAL COMMITTEE - The Technical Committee will act in the advisory capacity for the Racing Commission. They will make recommendations as to the changing of rules, and will maintain close observations for improved safety regulations for this sport. The Racing Commission will clarify rules adopted by the National Boat Racing Association for their respective divisions, but will not make rules.

7.      ELECTION OF OFFICERS-All members in good standing of the National Boat Racing Association have the authority to nominate individuals as candidates for offices of, President, Vice President, Secretary/Treasurer, Safety Director and Director of individuals respective state. Any member in good standing may be nominated except as outlined in paragraph 2. Individuals nominated must have agreed to serve if elected before their names are placed in nomination. The nominations must be forwarded to the NBRA National Office in writing on or before October 1st. The Executive Secretary will prepare a ballot and forward it to all members in good standing on or before October 15th. The ballots will be returned sealed via US mail or other postal services to The Executive Secretary by the date indicate don the ballot which must be a minimum of 2 weeks prior to the National Meeting. The Executive Secretary will have 4 days to count the ballots and make public the results of said elections. The individual receiving a simple majority of votes cast for any office shall be declared elected. Officers will hold office until the next election. The outgoing officers will conduct the next National Meeting up to a swearing in of the new officers following Old Business. The names of the current officers running for re-election shall appear on the ballots. Each officer and director must be elected each year. Write in nominations are permissible. Ballots must be brought to the National Meeting along with the envelopes they were received in.

8.      ELECTION OF RACING COMMISSION- the individual receiving a simple majority vote of the ballots cast in their respective state will be declared elected as Director of that state. This individual shall serve as a member of the Racing Commission. Each respective state is responsible for the election of their Directors.

9.      AMENDMENTS- Amendments to these bi-laws must be recommended by the Racing Commission for approval of the membership.

10.    MEMBERSHIP- Membership to THE NATIONAL BOAT RACING ASSOCIATION shall be provided as follows: Individuals may put in an application for membership to this Association designating their affiliation as outlined below:

10A. Racing club dues must be paid by January 15th. A $20.00 late fee will be charged if paid after due date. The Calendar Year of the National Boat Racing Association is January1st - December 31st at which time all memberships expire. The sanction fee for all NATIONAL BOAT RACING ASSOCIATION events will be as follows-

11.    DISCIPLINE:      Charges filed against any member of the National Boat Racing Association for violating the rules and bi-laws of the Association, or for conduct unbecoming of a gentleman or lady, or for acting in an unsportsmanlike manner, or against an officer for the mishandling of the Associations affairs shall be in writing and must be sent to the President and Executive Secretary with a full statement of facts and all matters concerning the charges within 30 days from the date of notification. The Racing Commission shall give the accused a hearing on the charges, or may delegate a committee to conduct the hearing and forward to the President ant the Executive Secretary the findings as well as recommendations. These facts and recommendations shall then be mailed by the Executive Secretary to each member of the Racing Commission. The Racing Commission shall have the authority to expel, censure, fine or assassinate the accused and the decision of the Racing Commission will be final. If a fine is imposed funds are to be paid to the treasury of the National Boat Racing Association.

12.    PROCEDURE FOR RULE CHANGES:          Any member desiring a rule change must submit the  suggested rule change in writing to the National  Office on or before October 1st. Suggestion may also be made at the National Meeting either orally or in writing. The Annual Meeting will be held near November 1st each year. All suggestions pertaining to rule changes which pertain to boats and motors will be checked by the Technical Committee concerned and submitted to members present at the National Meeting for discussion. If the majority of those members present vote in favor of the rule change, it will then be submitted to the Racing Commission for their approval to be placed on the ballot. The Racing Commission may vote for or against the proposed rule change. Their decision is final. Only Racing Commission members present at the National Meeting will be allowed to vote. No proxies are permitted. The Proposed rule change will then be placed on a ballot and forwarded by the National Office to all members concerned by January 1st.All changes except safety changes must be voted on by the members concerned. All changes voted on must receive a majority of votes cast, and at least 25% of the registered in the class(es) concerned. If through error in adopting or amending any rule, it is found unworkable, hazardous, or not in the best interest of the National Boat Racing Association, the Racing Commission may make a decision concerning such rule and issue to all members concerned a notice of change.

13.    PROCEDURE FOR ADOPTING NEW RACING CLASSES:   Any member in good standing may submit a request to the National Office, accompanied by a petition signed by 25 individuals indicating their desire for a new class. Such a request will be forwarded to the members of the Racing Commission for its decision as to whether or not the proposed class should be adopted. Included in the request must be complete data concerning the new class, with recommendations for proposed rules. The Racing Commission may at its discretion admit the new class on a probationary basis on a national scale, or designate that it be run in a designated district, or admit the class as an addition to other classes on a national scale.

14.    NATIONAL BOAT RACING ASSOCIATION PURCHASES:   Anything costing $500.00 or more is to be approved by the Racing Commission.

15A. Expenditure of these provided funds must be accounted for and provided to the National Office.

2016 Rule book is available in a PDF format by clicking the following link, you can download it to your computer for reference or you can print it to put in your tool box.  The 2016 rule book will be uploaded as soon as it is finalized and published.